Energy might not be the first thing that comes to mind when you think of a Circular Economy, but think about it for a second. When you want to refurbish a product you will need to replace parts. When it comes to recycling you will need to break a product down to its core elements to be able to use these resources in new products. All of which demands energy!

Even if we manage to close the loops on resources and products it would still mean that by burning coal and other fossil fuels we are still on a collision course with nature since this is causing more CO2 to enter the atmosphere, causing climate change, and increasing health risks. From a more holistic perspective, in order to be sustainable, the circular economy would have to be powered by sustainable energy sources.

A lot of people realise that we cannot depend on fossil fuels for our future energy needs and for decades now we’ve been seeking for solutions. The so called ‘renewables’ seem to have reached a “holy grail” status. But are they really the answer?

What on earth could be wrong about renewables?

An article called ‘If Solar Panels Are So Clean, Why Do They Produce So Much Toxic Waste?’ by Michael Shellenberger clarifies the problems that come with solar. Shellenberger quotes a veteran solar developer “I’ve been working in solar since 1976 and that’s part of my guilt. I’ve been involved with millions of solar panels going into the field, and now they’re getting old.”

The problem with ageing solar panels is of course that they, like any other product, have a limited lifespan. When they reach their end of life the panels create a large amount of toxic waste for they contain Lead, Cadmium and Antimony amongst others that are not easy to recycle, although it is possible. These toxic elements can be used in new solar panels, but as of today recycling costs exceed the costs of virgin materials so there is no economical gain. Aside from this solar creates a risk when deployed as well. There are numerous accounts of incidents from all over the world, for instance after harsh weather conditions such as hurricanes, leaving behind shattered solar-panels from which the toxic elements have leached into the soil.

The biggest problem Shellenberger states is coming from solar is a basic physical one: “Sunlight is dilute and diffuse and thus require large collectors to capture and convert the sun's rays into electricity. Those large surface areas, in turn, require an order of magnitude more in materials — whether today's toxic combination of glass, heavy metals, and rare earth elements, or some new material in the future — than other energy sources.”

Both wind and solar have their own problems, but one that they have in common is that they take up large areas related to the amount of energy they generate and they also require a lot of resources. This eventually means huge waste streams which now largely go to landfills.

Another problem occurs when the sun is not shining and/or the wind is not blowing. Whenever you depend on renewables you depend on natural, yet, inconsistent conditions. In the following TED Talk Shellenberger explains that when the return in energy is low due to these conditions you still have to compensate through burning fossil fuels. On the other hand, when there is too much electricity generated through the renewables you are stressing the electrical grid.

Solar- and wind farms also have their effect on local wildlife. Temperatures above solar farms, for instance, get so high that birds flying over them actually catch fire and plummet to their death. With regard to wind turbines you can actually see that something was introduced that the natural world has no answer to. While rotating their blades turbines actually hit, and kill a lot of birds of prey which has a profound effect on entire ecosystems.

If not renewables what then?

The human kind has been moving from fuels with low energy density (e.g. wood and peat) to more energy dense fuels (petroleum and gas based). Eventually, after the nuclear arms race of the 1930’s and 1940’s, we started operating nuclear reactors to generate electricity.

Shellenberger has numerous mentions and one, in a Dutch newspaper, that quotes him ’The best energy-waste is nuclear waste’. In this article Michael describes that renewables are not the answer to the energy crisis and it actually contributes to numerous environmental issues as described previously. According to him nuclear energy is key in the energy transition. While nuclear power was something he was actually against in his early career he might now even be its most prominent advocate.

To consider this as an alternative he lays out some examples to elaborate on his standpoint. France, for instance, gets most out of its energy out of nuclear which is basically clean for its waste is contained and it does not take up much space. Any other energy resource either emits a lot of waste into the atmosphere or uses a lot of materials. What France would have to do when it increases the amount of renewables is to actually reduce their dependancy on nuclear and to increase their dependency on fossil fuels due to the fluctuating output of renewables. Since the output on nuclear can’t be lowered or upped, it would not be suitable to use it alongside solar and wind.

The biggest problem with nuclear energy seems to be its bad image and that, according to Shellenberger, does not seem to be rightfully so. Sunniva Rose agrees with him on that in her TED Talk.

She uses the examples of Chernobyl and Fukushima. Fukushima, Japan was stricken by a tsunami which caused damage to the reactor. The news made it seem like a lot of people died from the accident at the power plant while actually the victims were caused by the tsunami and the chaos that followed, not radiation. In fact radiation is higher in Oslo than it ever has been in Tokyo, even during the incident at Fukushima she states. She elaborates on this stating that radiation is naturally occurring all the time and is not necessarily dangerous at the levels we are regularly exposed to.

In the video she also compares the amount of deaths caused per Twh generated by different energy sources. 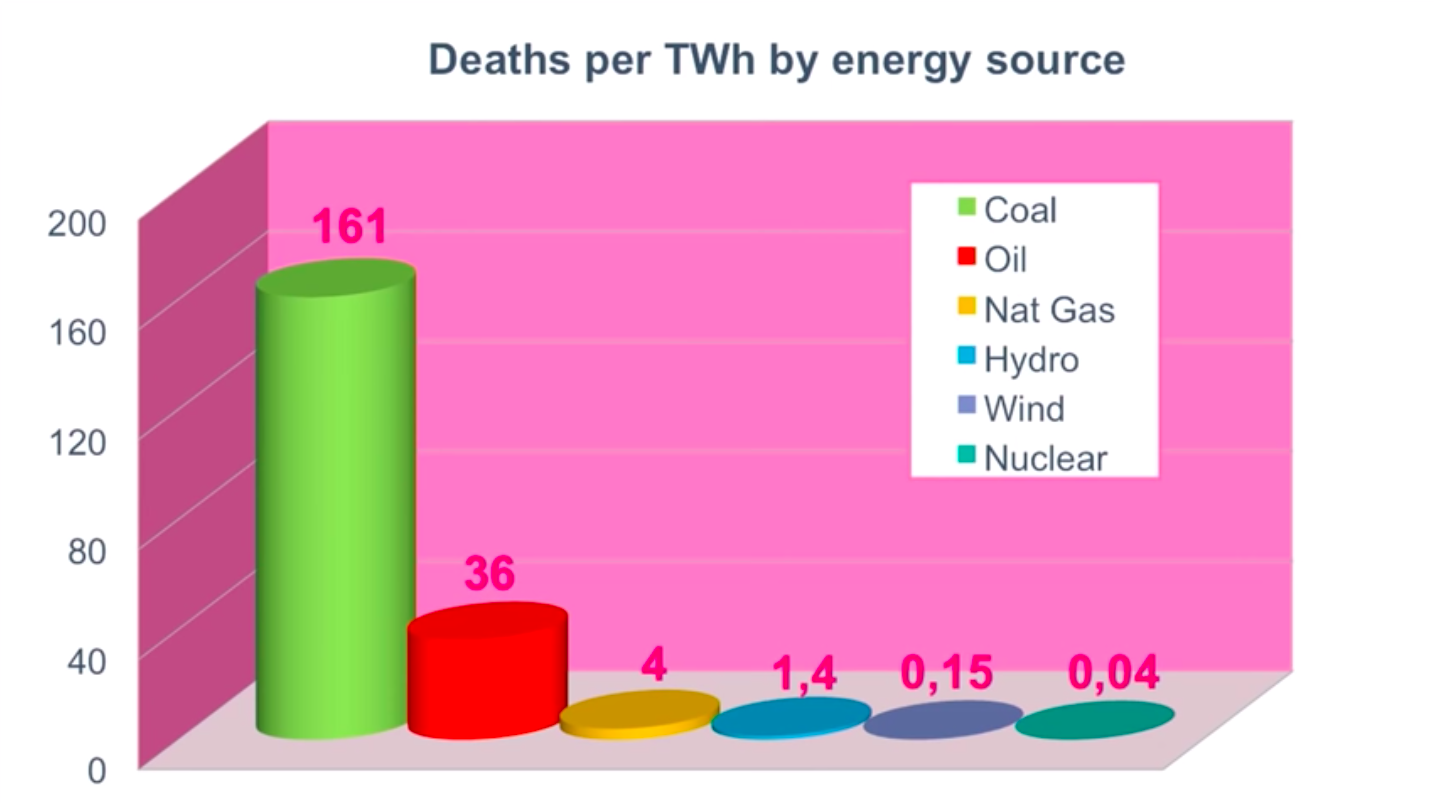 These numbers are not telling the entire story of course but it does provide some perspective.

At 12:38 in the TED Talk Sunniva starts on her “favourite element”, which is Thorium. Named after the Norse god of thunder Thor it has quite a reputation to live up to, but it might be able to do that. This element ‘might be used as nuclear fuel’ according to her. It is an element with reserves that exceeds three times those of Uranium.

The thing about Thorium is it does not serve as nuclear fuel directly for it will not fission directly, but when it is hit by neutrons it will be transformed into Uranium 233 (U233). As it turns out U233 is excellent nuclear fuel because it will fission, instead of Thorium, and as a result of its properties it will not turn into long lived radioactive waste. That waste does come from U235 and U238 however and it so happens to be that these are most commonly used as nuclear fuel today. These isotopes will, through the fissioning process, turn into Plutonium as waste which is highly radioactive for a long time and could potentially be used in nuclear weapons.

Another advocate of Thorium named Thomas Jam Pedersen states that: “While we are now mining for metals to use in our electronics we are already mining Thorium. There is just no current market for it and since it does cost money to refine it, no matter how minimal, without a market, Thorium just gets put back into the ground.”

In his TED talk he digs into research that has previously been done on Thorium.

What he also said was is that we know how to refine and use thorium through Molten Salt Reactors (MSR) that have been around since the 1960’s. A small group of scientists based in the U.S.A. got the MSR to work and ran it for 5 years. This particular device was not able to convert the energy derived into electricity, but they knew if they could make this machine work that they could also make it possible to convert the energy that the reactor provided.

Pedersen continues to tell the story on the history and elaborates that It was very unfortunate that the Nixon administration, that was in office back then, did not understand the technology and promised some of the lobbyists to create jobs in California for which they needed the funds that were now spent on the Thorium research and thus the MSR-programme was shut down. As a result there has not been any research on Thorium as an energy source for almost 50 years. This was until a man called Kirk Sorensen started to look into it and published papers written by the scientists that were involved in the 60’s on the Internet. People now started to realise the potential of Thorium as a resource.

Kirk Sorensen has been promoting Thorium as a next generation fuel for many years now and of course there is a very useful TED talk to go with it.

He elaborates in this video that Thorium was tested in a wartime effort by a Californian chemist called Glenn Seaborg who was later involved in the Manhattan Project (which delivered the first atomic bomb) to learn about its properties. As it turned out Thorium was unsuitable for bommaking (unlike Plutonium which Seaborg also discovered) because of to the U233 that would be formed would always be contaminated with other elements that will always emit large amounts of radiation. But he discovered something else that would be very important in the understanding of the potential of Thorium. U233 can continue to create enough neutrons in its fission to create new U233 at an equal or greater rate than it was consumed. Sorensen states that this process could last as long as the Thorium would last. So are we talking about a never ending energy source here?

A lot of confusion so the search for more facts continues.

Sorensen has designed a reactor that not only generates electricity but also desalinates water and produces nuclear medicines that are in high demand and he thinks that we tend to think about nuclear in a negative way because of the negative introduction it had during wartime. Bot Sunniva Rose and Thomas Jam Pedersen tend to agree with him. Michael Shellenberger states in the Dutch newspaper article that “Thorium is a fantasy, it is wishful thinking by the industry” and he plees for the traditional approach towards nuclear. Even his opponents from the anti-nuclear lobby WISE (World Information Service on Energy) seem to agree with him that the Thorium dream is lightyears away and even had this confirmed by two esteemed professors from the Netherlands.

As the debate continues it is important to explore every option to solve the growing demand for energy before we run out of time and resources. The energy transition is going to take its key role in the transition to a circular economy which is why this is an issue that cannot be ignored. If you have become interested through this article please continue educating yourself for there is a lot to be learned and to be discovered on this topic.